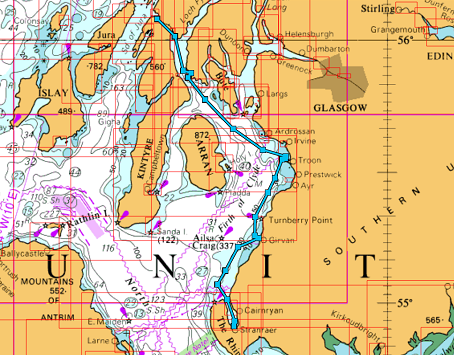 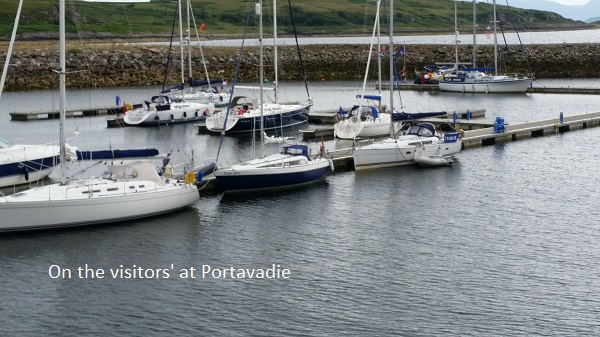 I exit the sea lock of the Crinan Canal at 10.30 in a fresh north westerly and have a grand 10 mile sail south down Loch Fyne (where the kippers come from) to a highly recommended marina at Portavadie with the promise of high class ablutions, which were sadly lacking on the Crinan Canal.

Booking into Portavadie Marina is more like booking into a posh hotel. It's a spa/party/conference/wedding/holiday centre with a marina on the side. Rumours about the luxurious ablutions are spot on.

Heated floors, huge shower suites and unlimited hot water ensure that the body was soon washed, as were t-shirts, underwear and socks. 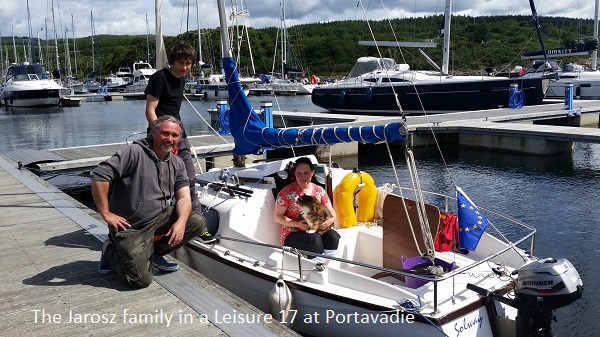 Mum, Dad, teenager and cat in an L17!
I discover the lovely Jarosz family in Portavadie Marina, holidaying together in a 17 foot Leisure which was purchased from Fisherrow, Musselburgh. I felt guilty admitting that I had an 27 footer all to myself.

In the mid 1970's the government earmarked Portavadie for oil rig construction and nearby Pollphail for a new housing estate for 500 workers.

The oil rigs were never constructed since metal not concrete became the preferred material. The housing estate was completed but the workers never arrived and the houses have been standing empty for over forty years. A true ghost village.

However, the marina was built in the large 'hole' which was dug/blasted out in 1975 at an estimated cost of £14 million! 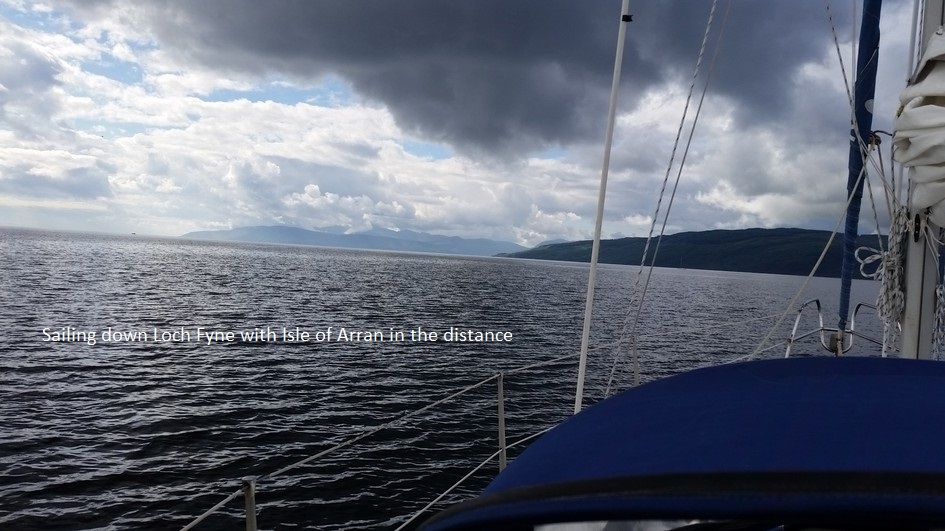 The money for the present day holiday development comes allegedly from one of the wealthiest families in Scotland with huge holdings in whisky distilling and drinks distribution.

Depart Portavadie at 10.00 on a lovely, sunny morning with very little wind. The scenery in Loch Fyne is spectacular, mountains, trees, islands wherever the eye rests. To starboard is the Kintyre Peninsula, to port, West Kyle and the Island of Bute. 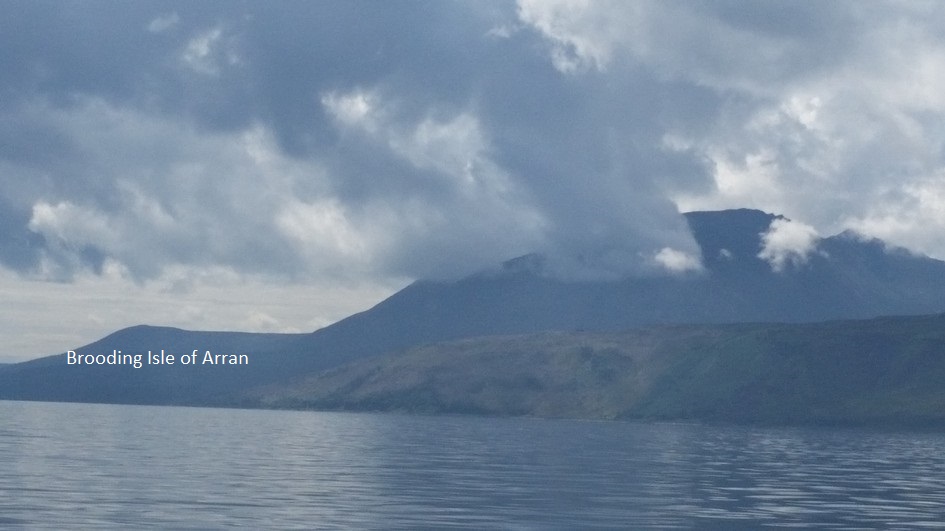 Dark Star motors quietly on down the east side of the Isle of Arran towards Ayrshire. Had I gone down the west side of Arran, the destination would be Campbeltown, but the forecast is poor and Campbeltown appears a remote place to be weather bound.

Passing the entry to the river Clyde, leading to Greenock and Glasgow, the wind picks up and the swell coming up the Firth of Clyde is straight on the nose.

After an hour or so of bumpy motor sailing, Dark Star can be freed off by 20 degrees, the engine turned off and a good sail is enjoyed into the port of Troon.

Tuesday produces gusts of 20/25 knots and on Wednesday we have a full blown gale with the barometer showing just 998 which is remarkably low in the middle of summer.

Troon marina is excellent, power and water on pontoons, good wifi, diesel readily available, very good showers and a large new Morrison's superstore a few hundred yards away. It ticks all the boxes, but just lacks a laundry room.

There is also a good yacht chandler. This is surprising since most of the chandlers in smaller ports round the country have been wiped out as customers move to buy on line. I buy 20 litres of diesel (red) for £12 here, the cheapest on the trip.

Originally Troon harbour was built to export coal from the Ayrshire coal fields. Today it's main claim to fame is to host the Open Golf competition every seven years at 'Royal Troon'. I had just missed the 2016 event by a couple of weeks.

However it's a slightly depressing place to walk around in heavy rain! Ten years ago both Seacat and P & O competed to provide ferries to Larne in N Ireland.

Seacat packed up in 2003 and in January this year (2016), P & O closed down it's operation, leaving a large empty ferry terminal.

Thursday August 4 Troon to Girvan 23 miles not a good idea! 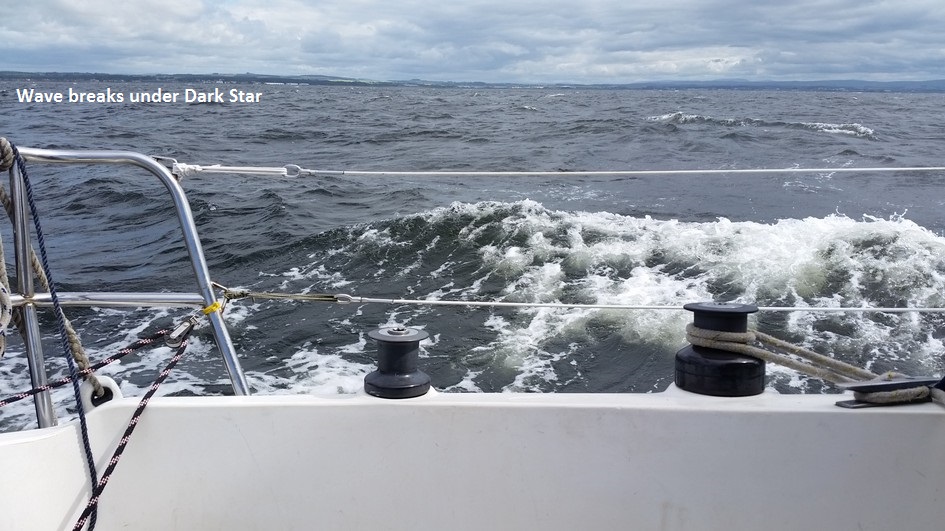 After two days in Troon a weather window suggested I should head west to Girvan. The wind is from the north west which should push Dark Star nicely south west to Girvan.

However the wind has been gusting 15/20knots during the morning and I did not appreciate that the swell had not died down from the previous day's gale.

Emerging at 13.30 from Troon onto a choppy Firth Of Clyde is far from comfortable, but I thought I would give it half an hour and if necessary, return to port.

However with the wind off the stern and a just a bit of genoa, Dark Star is romping along at 5 knots. The quartering waves from the swell prove too much for the autopilot and it's necessary to steer by hand for the next four hours or so. 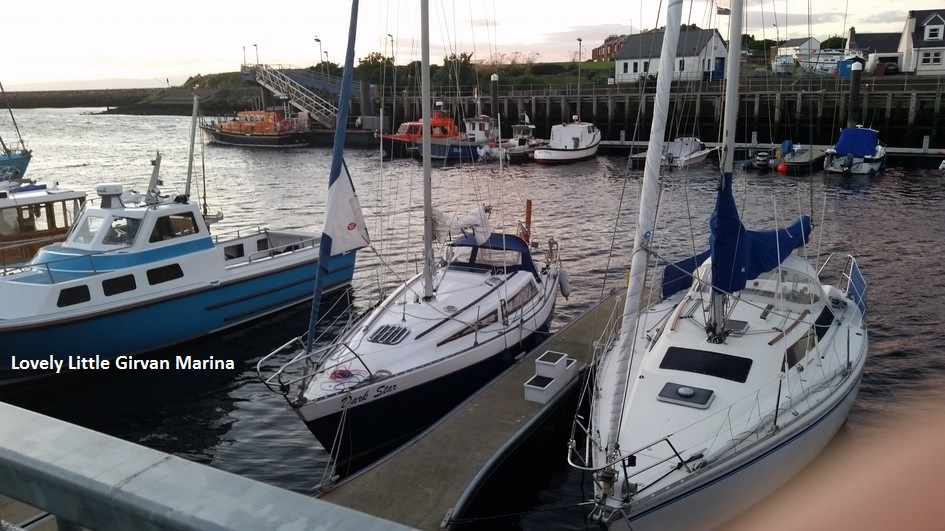 Running the engine in slow speed helps the autopilot to cope better and allow for a break for a drink and a snack. Rolling into Girvan bay with 25 knots up the bum is interesting.

For a while I can't see the very narrow harbour entrance since holding the binoculars steady is a wee bit difficult.

Once through the narrow entrance, the friendly harbour master, Roddy can be seen waving Dark Star onto a vacant berth within the tiny marina where there is shore power and water on the pontoons.

The smaller the marina/harbour the friendlier it seems to be. Girvan proves a most friendly place and I enjoy the company. Again a walk around the town is a bit depressing. The harbour was built around the fishing industry which has long disappeared.

There are two major employers in the town William Grant, Whisky Distillers and Nestle, manufacturers of chocolate. If either closes it will be devastating. Property prices are in line with the north east of England ports, three bedroom houses for around £80-£90k. 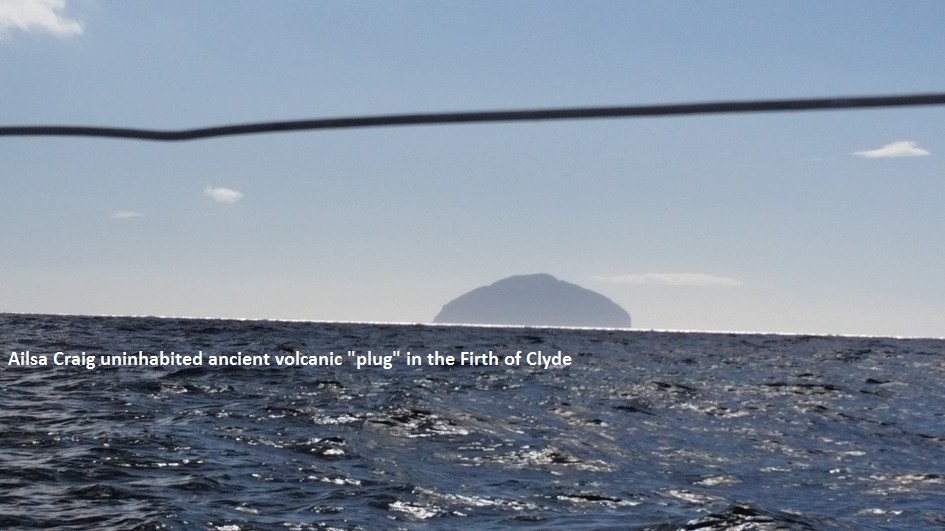 The intention is to sail the 42 miles from Girvan to Bangor in Northern Ireland, across the strong tides of the North Channel. It will be a nine hour trip, but the forecast is excellent with gentle breezes of 6-12 knots.

However strong winds are forecast for the two following days. The plan is to cross to Ireland and when the strong winds have passed, sail down the Irish coast under the shelter of the land pushed along by north westerly winds expected later.

Dark Star leaves Girvan at 09.30 with a four hour trip to the entrance of the North Channel. At that point I would have Loch Ryan to port as a possible bolt hole, with Stranraer harbour eight miles down Loch Ryan.

Until 12.30 Dark Star motor sails easily against a westerly wind, but the wind is freshening and the swell building. The sun disappears as a weather front pushes through. Soon there are 20 knots of wind on the nose and water flying over the bow.

I push on hoping the front will pass quickly, but after another hour of wave bashing it is time to make a decision. Can I endure another five hours of this? Single handed, nine hour trips leave little margin for error.

With more crew, an easier course, more off the wind, could be set, but will require regular tacking to reach the objective, possibly doubling the distance sailed.

Single handed this is not safe and I opt to run for shelter in Loch Ryan and a berth in Stranraer marina. It's only the second time I have "chickened out" on the trip.

There is some shelter from the swell as I back track across the headland, but turning to starboard (right) to enter Loch Ryan brings Dark Star head on to the waves running straight down the seven miles of the loch, and against the incoming tide. Some 'shelter'. Oh what joy.... 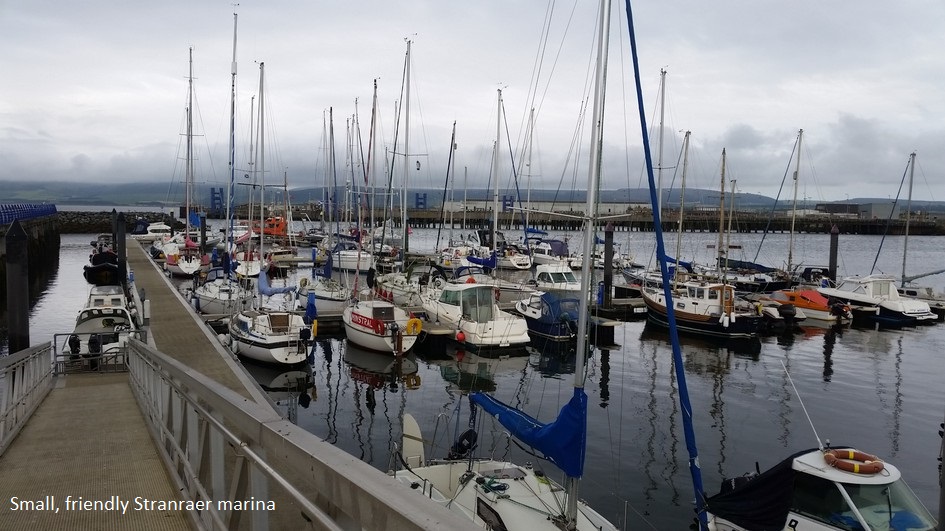 A mile into Loch Ryan, on the starboard side is Lady Bay, a blissfully sheltered little anchorage where I gather in the sails and my disappointed thoughts.

The wind is gusting F6 from the south, south west, but an hour of hard motoring with water flying over the bow finally delivers Dark Star safely to Stranraer marina at 15.30.

The noise of the wind in the rigging of neighbouring yachts confirmed it was wise to abort the trip. Stranraer Marina is not very big, but ticks all he boxes, excellent showers, power etc. and within 200 yards lies a Tesco supermarket and the town centre.

As I write this, the gale which started on Saturday afternoon is still screaming away 24 hours later. After a respite this evening, the forecast is another gale for Monday followed by strong north westerlies until Friday 12th.

Looks like I am stuck here, possibly for a week! It's extraordinary. Midsummer and yet there have been three vicious gales in seven days. 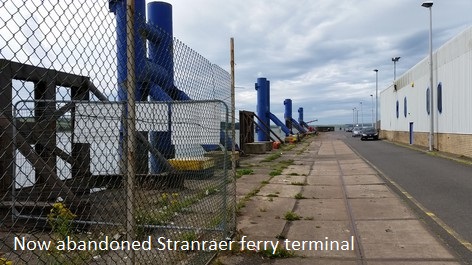 Poor old Stranraer
For 150 years Stranraer was the main ferry link with the Northern Ireland ports of Larne and Belfast. However in 2011, Stena Line closed the ferry terminal in the town of Stranraer

A new purpose built, deep water facility was constructed at Cairnryan which is 4 miles north of Stranraer.

The old ferry terminal in the town now lies derelict and vacant. The railway station is also now stranded beside this abandoned terminal. Push aside the tumble weed and it's still possible to board a train four times a day to Ayr.

With the closure of the terminal five years ago, the heart seems to have been ripped out of the town. A ray of hope came with the promise of large funds for regeneration from the EU.

Brexit and the likely withdrawal of EU funds is a second hammer blow for this unfortunate town.

On a lighter note, this week while weather bound, I might take advantage of the £20 return trips offered by Stena Line ferry to Belfast and visit the Titanic exhibition. It's an ill wind that blows nobody any good. Hang on didn't the Titanic sink.....

Distance covered to date 958 miles.
Thanks for reading this

PS There's resentment at the gap between the perceived prosperity of London and the South East and the rest of the the country.

In Scotland the prosperity gap between the Glasgow/Edinburgh conurbations and the rest of Scotland seems much greater. An interesting problem for the Scottish Nationalists.....