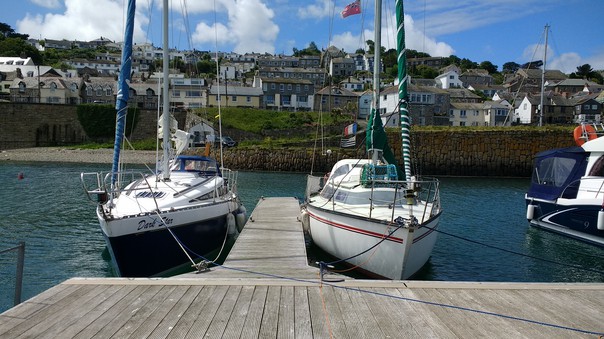 Heavy rain forces an enjoyable "lie in". Showers or toilets have not yet been offered in Newlyn. The employee who took the berthing money last night made no mention of them.

Its a council run harbour and the harbour office is closed every Saturday and Sunday.

Word is that the man who takes the berthing money, hangs out in a blue painted control tower on the quay. He has a key to the ablutions, but so far I have had no luck finding man or key. However I hear apocryphal stories about the "facilities".

Penzance is just a 14 minute bus ride away (free bus pass) and contains a large Leisure Centre and Swimming Pool so that seems a better idea. 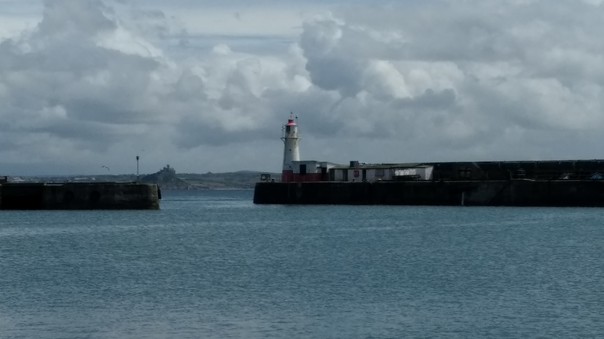 Visiting a Leisure Centre without my carer
I duly set off for Penzance. Google maps show the Leisure Centre is under a mile from the town centre and the walk is just the exercise I need.

Unfortunately Google maps does not show it's a steep uphill climb all the way and the sun is out in strength.

There are no flat areas in Penzance which is built on a steep bank overlooking the harbour. By the time the Leisure Centre appears, I am hot, very sweaty and ready for a shower and swim.

Going through the doors, it strikes me that my rucksack contains towel, soap and shampoo - but swimming shorts have been left behind. Gaining entrance to a swimming pool without appropriate clothing is tricky.

Fortunately swimming shorts can be purchased, but this shower is becoming expensive. At the reception desk (sits in front of the pool, on the right is a cafe area) the young man asks if I would first like to try on the swim shorts for size.

He indicates changing rooms to the left and down that corridor I find male changing rooms, deserted and bone dry. However, they do contain a set of showers.

With quicker thinking I could have had a free shower then returned the unused swim wear saying it didn't fit.....

Undressing, I remember how I dislike using places like this as a newcomer. Everyone else knows exactly what to do and where to go. Clad in the new swim shorts, everything is stuffed in the locker.

Ah, I need a £1 coin which is in the jacket pocket at the bottom of the locker.

Pull everything from the locker and now with £1 coin successfully in hand, unsuccessful attempts are made to put the coin in the slot. None of the lockers will accept the coin, so nothing for it but to march back to reception in swim shorts whilst the cafe patrons look on, puzzled.

It turns out that the lockers accept only old £1 coins and the one provided by reception does the job.... It's lovely to have a hot shower after several days spent on moorings with no "facilities". Baby wipes only do so much.

Refreshed and dripping wet I leave the changing rooms and turn right, through a door to find a game of badminton in progress.

Asked in which direction lay the the swimming pool, the players look nonplussed, point out I have been using the changing and showering facilities for non swimmers and suggest I go back the way I came.

Leaving a trail of water I arrive back at the reception desk/cafeteria area where the young lad points out the now obvious entrance to the pool area. "I only meant you to try on the swim shorts back there" he calls....... 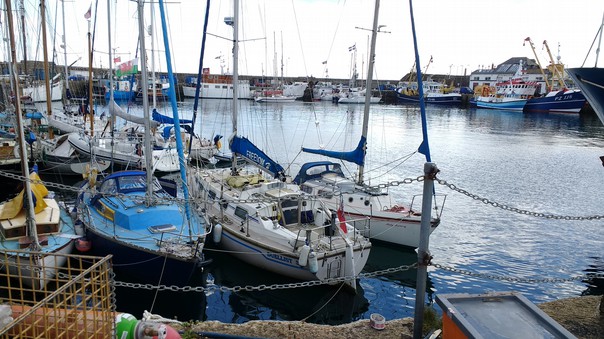 Glad I did not berth in Penzance Harbour
After a few lengths of the pool, the youth of Penzance arrive in force and swimming backwards becomes hazardous.

After a coffee, I descend down the hill to Penzance Harbour which has an inner area with lock gates, allowing craft to stay afloat when the tide recedes from the bay.

I nearly booked a berth here, but as the photo shows, there are very few berths in this small Penzance dock and yachts are rafted out several deep, the outer ones with no access to power. My berth in Newlyn harbour is much preferred. 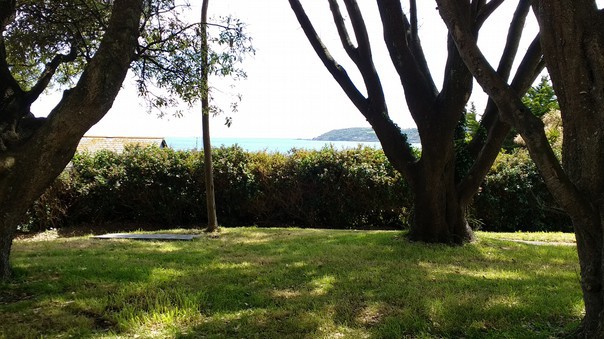 Some musical culture
The Church of St Mary stands prominently above Penzance harbour and provides a pleasant venue for a "free" concert featuring an excellent soprano, Maria Heseltine and the very polished Corineus String Quartet.

After a short interval (no drinks or tea on sale, an obvious earning opportunity missed?) the string quartet romps its way through Dvorak's String Quartet no 13 in G major. It is a welcome, relaxed, "civilised", couple of hours after the rigours of the sea!

There is a voluntary retiring collection and the attendance is around 100, mostly old fogies like me. And so by bus back to "uncouth" Newlyn.

I wake at 3 am with boots clumping over the cabin top and much shouting. Pushing back the hatch revealed a big 40 foot French yacht trying to come alongside and raft up against the much smaller Dark Star.

Dark Star is only 27 feet and occupies quite a small pontoon berth. I "politely" point this out and also point out that there are no mooring cleats available to take securing lines ashore.

Hanging on to Dark Star expecting her to take the strain of both craft in the coming 50 mph winds is clearly irresponsible and unseamanlike.

Conveying this in the dark, at 3 am, in faultless French is well above my pay grade and shamefully I finally make do with "Imbecile" and "Just bugger off". They do. Maybe Brexit will put a stop to all this? 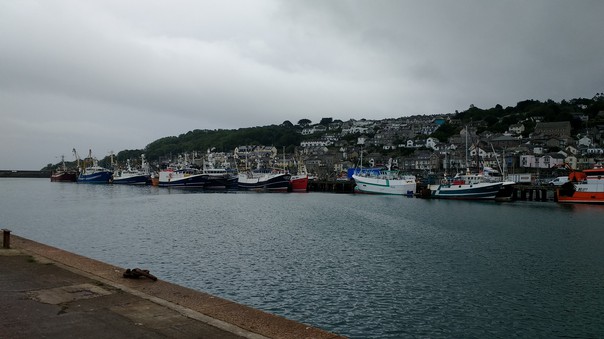 The barometer falls to 960 which is remarkably low for what is now officially "summer time". The winds hit hard with 50 mph gusts and the rain is torrential.

Most of the fishing fleet has returned to harbour and the Newlyn quays are jam packed, with trawlers rafted out two or three deep.

During the daily call home, Val suggests buying a chicken and roasting it. It will provide fresh meat for the next three days. Never tried it before on Dark Star but it's a something constructive to do on a vile day and it turns out to be a real winner.

Unfortunately in the Coop, I could only get a medium and not small chicken which is far too big for one person.

However my neighbours are a young couple in their mid twenties, sailing a Contessa 26 with coffin-like accomodation.

It's only a foot shorter than Dark Star but the interior is more akin to a Leisure 17. The couple happily accept my tin foil packages of freshly cooked chicken. 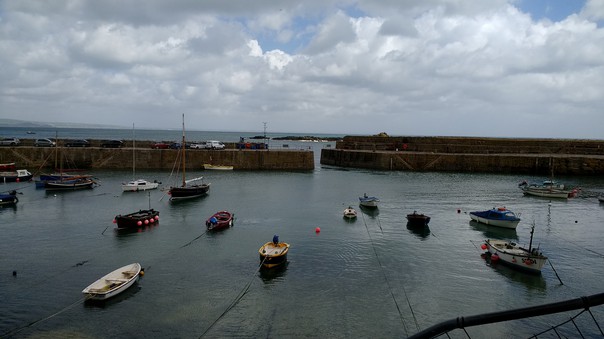 There is a slight respite in the winds and several French yachts make a dash eastwards towards Falmouth, but for those of us going west, there is no hiding place and we stay put.

A short free bus pass ride along the coast brings me to Mousehole, a tiny drying harbour, but remarkably sheltered. Drying out against the harbour wall is the only option for visiting yachts - and they is only one.

Back in Newlyn, the charming couple in the Contessa ask me round for drinks at 18.30 and we gather in the tiny cabin (sitting headroom only) with drinks prepared along with a nice "female touch" of lighted candles!

It turns out the young skipper was educated in my home town of Musselburgh, but at a top school, Loretto........ He did not know much about the Pinkie council housing estate whence we Gilroys sallied forth.

The intrepid couple had already sailed to the Scillies, en route to Brittany but after only two days, the bad forecast forced them to head for shelter in Newlyn.

Had an excellent cold chicken salad for dinner.

Made a successful foray to the Leisure Centre in Penzance for a shower and a swim. On the bus back, meet a couple in their sixties who are travelling around the UK by bus, on their free bus passes!

They travel only for a month at a time, carry just one rucksack each, stay in B and B's as necessary and launder clothes where they can. They thought that sailing around the UK sounded the height of luxury....

Stay or Go Home
There is a glimmer that this unsettled spell will pass and high pressure "might" build, starting on Monday 12th which would allow a crossing to the Scillies (34 miles) on Tuesday 13th.

If this does not happen, it is tempting to leave Dark Star here and return home to Shoreham until the weather settles. That would be disappointing and it's an eight hour journey back by train to Shoreham By Sea!

Another blustery day, but with some sunshine. Buying diesel in Newlyn for yachts has been difficult in the past, with minimum bunkering of 100 gallons required at the trawler fuel jetty.

I ask Dave who does the night watch at the harbour whether there is any chance of filling a couple of cans with 20 litres of diesel. "No problem. The harbour master has recently decided to make diesel available for recreational use and you are my first customer".

So ignore all the pilot book and internet advice, diesel is now available for yachts in Newlyn. Unfortunately the dire descriptions of the available single shower and toilet facilities are still accurate.

The Pirates of Newlyn
Newlyn is the UK's furthest west fishing harbour and has a feel of the wild west.

In harbours as busy as Newlyn there is usually a lot of radio traffic over permissions to enter and leave the harbour. Here, however fishing trawlers of all sizes come and go with hardly a radio call heard!

You have probably heard of the Pirates of Penzance (Gilbert & Sullivan), but back in 2009, the Pirates of Newlyn hit the headlines. An astonishing legal case exposed a conspiracy by fishermen at Newlyn to evade rules designed to conserve fish stocks.

Owners, skipper and auctioneers were convicted of systematically falsifying paperwork which disguised the sale of illegally landed species, as fish types which could be landed legally.

Fines of some £200,000 were handed out to six owners and skippers in respect of a specimen charges covering just a six month period in 2002.

From newspaper reports: "Truro crown court was told that at the heart of the case was the company of W Stevenson and Sons which has been in business since the 19th century and controls much of the fishing out of Newlyn, as well as an auction house".

The firm, W Stevenson was given a conditional discharge at Exeter Crown Court in June 2009. The company and its fishing fleet remains a dominant force and provider of employment in Newlyn.

Lets hope the weather settles and allows for a long visit to the Scillies this coming week.