SHOREHAM BY SEA TO RAMSGATE - 95 miles

Endless preparation were followed by two weeks of adverse easterly winds at the beginning of May, but it's finally time to head off on the evening tide.

Whilst concentrating over the last few hours loading supplies etc, I fail to notice that it has been gusting 15/20knots all afternoon from the south west and a choppy 1 metre swell provides a bumpy start.

I roll the 6 miles down to Brighton Marina under genoa (fore sail) and bit of engine. The new Simrad Tillerpilot just about copes with the quartering waves, but unfortunately after an hour it begins to make ominous noises.

I arrive in Brighton marina before dark and equilibrium is soon restored by a Big Mac and a diet coke. A healthy start to eating on this long trip!

Brighton Marina has silting issues and on the bottom of the current spring tide, more than one visiting yacht gently runs aground once inside the marina to the bewilderment of the crew. 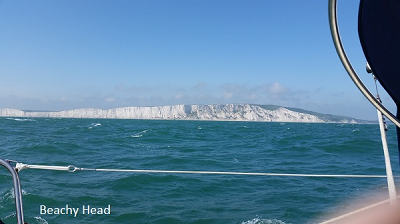 To benefit from the east going tide, departure from Brighton is at 12.00. With a fine SW 15 knots wind behind me, Dark Star romps along under jib and a reefed main.

An hour and half later, off Newhaven, the Coast Guard issues a strong wind warning. Too late for me, turning back is not an option.

Dark Star is sailing well and the Simrad autopilot is coping, but it making unhappy grinding noises. From time to time I take the tiller and just enjoy the sail, surfing down the waves as Beachy Head comes abeam at 3.30.

Once past Beachy Head, a sharp change of course to port (left) is required for the trip northwards to Eastbourne's Sovereign Harbour Marina.

The necessary gybe in this fresh F5, gusting 20 knots, has been on my mind for a while, but in a (fairly) controlled manner, the boom comes over, the genoa follows and off we go down past Eastbourne Pier.

By 17.00, it's quite low water entering Sovereign Harbour and I gently run aground whilst faffing around arranging mooring ropes fore and aft, tying on fenders both side of the boat and speaking on the hand held radio to port control.

For the single handed sailor this is by far the most tedious part of the arrival at a new port. I need to get more slickly organised.

Entry to Sovereign Harbour is via a lock so you have to moor twice, in the lock then again on the allocated berth within the marina. A good day's run is celebrated with a nice plate of Singapore noodles at the Thai restaurant in the marina complex. 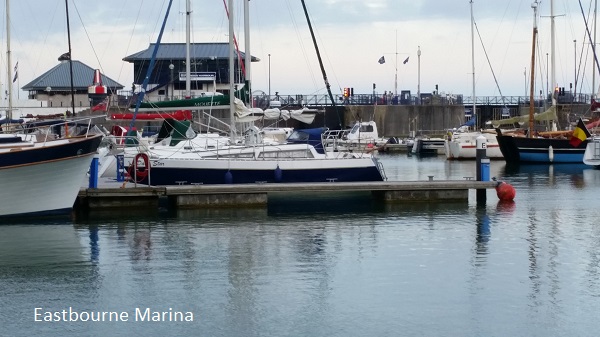 Strong winds and heavy rain ensure a day in port. There is plenty to sort out on the boat. The Windpilot which I originally bought more than twelve years ago, is bolted on the stern and set up.

Another very nice plate of Singapore noodles at the Thai restaurant in the marina complex made up for the miserable weather. The "facilities" here are good, better than Brighton. 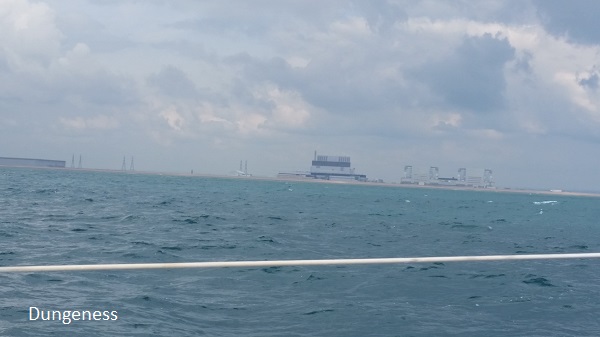 This is one of the longer trips, of 8/9 hours and is an early test of my stamina. Up at dawn and through the lock by 07.30. I am presented with a lovely flat sea across Eastbourne Bay.

The wind is from the north west, over my left shoulder. Under just a full genoa (fore sail) Dark Star is soon effortlessly ticking off the miles.

By 11.00 the wind swings round to the south west (typical sea breeze) but is still nicely behind me as the nuclear power station on Dungeness rises above the horizon.

Just after 12.00 Dungeness is abeam and with a strong tide pushing Dark Star along, 7.5 knots appears on the log as we sweep past this eerie, lonely headland.

Unfortunately the tide turns against me on the approach to Dover and the boat speed drops from 6.5 knots to 3 knots. Dover Harbour has two entrances, west and east, surrounded by two huge breakwaters.

The East is used by ferries and the west entrance by small craft who need permission from port control to enter. The western entrance is exposed to south westerly winds. The Force 5 (17/20 knots) which have now built up, ensure a bumpy ride through.

Still a 15.30 arrival is very satisfying, 8 hours for the trip. I set off for some celebratory fish and chips but get lured into the Hythe Bay Seafood restaurant.

They have a stunning dining room overlooking the whole harbour. Yes I do have fish and chips, but it's pan fried hake on a bed of roshti potatoes with samphire on the side. Well it has been a long day!

A walk around the town centre in the evening reveals an unattractive place hemmed in by an endless stream of huge lorries. But it's by far and away the busiest port in the UK, not a tourist attraction. Not expecting to stay, I did not consider the inner locked basin, but the outer basin is suprisingly small. "Facilities" are some way below Sovereign Harbour standard.

To benefit from a strong spring tide, an early start is not required, but by 9.45 I am gilling around inside the southern breakwater approaching the more sheltered eastern exit from Dover, requesting port control for permission to depart.

There is a ferry arriving and two more about to depart so I am asked to stand by. It's dull, pretty breezy and choppy even in the outer harbour.

No other yachts have left and I begin to have second thoughts. Maybe I should wait for a better day? Just then port control calls back "Dark Star please follow the two departing ferries at your best speed".

That decided it. I don't have the courage to back down so Dark Star crawls at 5 knots through the entrance in the wake of the ferries, now disappearing at 20 knots plus. The wind outside the harbour is blowing at 15-20 knots, from the south west, right from behind. Under just the genoa Dark Star seems to take off.

I have a strong tide behind me and the GPS soon shows 7.5 knots over the ground. For the next 15 miles, the speed over the ground never drops below 7knots and often shows 8.5 knots.

It's an exciting and easy sail. The Goodwin Sands lie between Dover and Ramsgate and my original passage plan is to go south, right outside the Goodwins.

However I am having such an interesting sail just a half a mile from an ever changing coastline that the passage plan goes into the bin.

I shoot down the Ramsgate Channel, past Deal Pier, Walmer Castle, the Downs (the famous naval Man of War anchorage) before turning sharply to starboard for the entrance to Ramsgate Harbour and Marina

It is just 12.00, the 15 mile trip took exactly two hours! Get the tide and wind in your favour and this sailing lark ican be pure joy. Dinner was "cooked" on board, pasta, jar of sauce and a tin of shrimps. 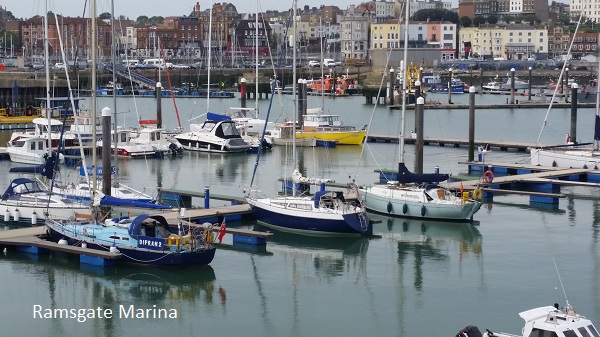 The wind was blowing force 6/7 with 30 knots gusts by midday which ensured another non-sailing day. Ramsgate is much more interesting than Dover and the day flew past with a day in the town, fish and chips and later tea with scones and fresh cream.

Ramsgate Marina is much bigger than Dover and easier for the single hander to negotiate. The "facilities" are on a a sort of portacabin and functional.

Thunderstorms are forecast but the hope is to set off across the Thames Estuary tomorrow and sail to Harwich some 45 miles to the North. There is not much wind forecast so it will be more engine than sail if the trip takes place.