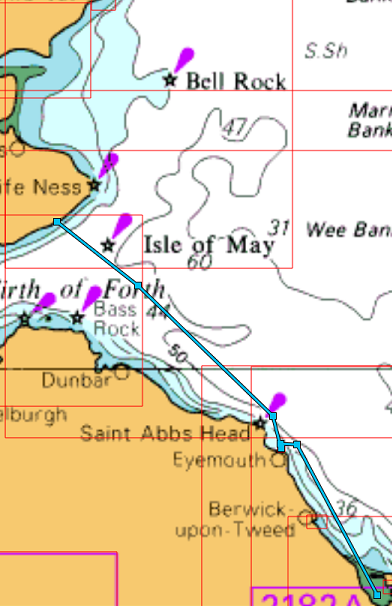 At last a dry, sunny day, perfect for some boat housekeeping, drying out and airing all the bedding, stored clothes, bunk cushions etc.

The topsides are hosed and cleaned and the rigging checked for tightness and the essential presence of clevis and split pins.

The decision is taken to return back to Shoreham By Sea on Wednesday 22nd June, in time to vote in the Referendum and remind my very understanding wife, what I look like.

Monday July 4th Return to Amble from Shoreham By Sea

Arrive back from Shoreham By Sea to Alnmouth station fairly late at 22.15 in heavy rain and mist. I just manage to catch the hourly bus to Amble marina, praying that the key fob would work on the marina security gate.

The green light and click as the security door opens brings a huge sigh of relief!

Wind blowing force 4/5, straight from the north and temperature back to 12/13 degrees. No departure possible today. Many visiting boats here are in the 'same boat'.

Will I ever get going? However, use the time to stock up in the town with all the fresh essentials. Surely must get away tomorrow. 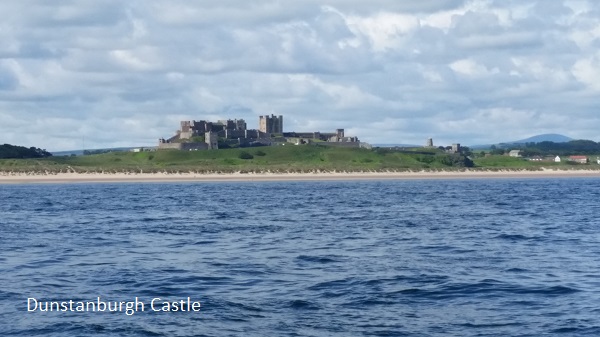 Bid farewell to Amble early at 06.30 in a light north easterly breeze but the sun is shining and the sea pretty calm. This stretch of coast is the most interesting visually since I turned north at Ramsgate.

The impressive bulk of Dunstanburgh Castle is soon in view on the headland off to port. The bays and attractive little harbours and anchorages roll past.

Alnmouth Bay, Boulmer, Craster and Low Newton. Low Newton looks a fabulous lunch stop, surrounded by land and rocks on three sides with a narrow entrance and a lovely sandy beach and bottom.

Farne Islands
Off on the starboard bow rise the Farne Islands, a mecca for bird watchers and seal spotters and a permament hazard to shipping, sticking 4.5 miles straight out into the North Sea.

My plan is to sail between the mainland and the nearest Farne Island, through the Inner Farne Sound. The direction of the tide is critical here, get it wrong and you make none or little progress.

Catch the tide running in the 'right' direction at its strongest (usually 3 hours after high water) and the boat seems jet propelled, well at 7/8 knots! Seahouses, the harbour which disgorges endless trip boats to the Farnes soon slips past.

The Big Harcar Rock, on the outer Farnes, claimed the Hull to Dundee paddle steamer, Forfarshire, wrecked there on the night of 7th Sept 1838, but spotted by Grace Darling at dawn.

Grace and her lighthouse keeper father rowed in an open boat nearly half a mile in heavy seas to rescue seven survivors, found clutching to the rocks.

Another nine passengers managed to get away in a lifeboat but some forty three passengers and crew were drowned. However Dark Star was in no danger as she flies through the Inner Farne Sound at 7-8 knots.

No sooner does one castle at Dunstanburgh recede in our wake when another, Bamburgh Castle, hoves into full view. On a lovely day such as today, this is a spectacular part of the coast.

The Holy Island of Lindisfarne

Next up on the horizon appears Lindisfarne which flourished and became the centre of Celtic Christianity until the Norsemen/Vikings turned up on June 8th 793.

Apparently in June 793, northerly winds blew the longships straight from Norway. I'm sure there is a 'bon mot' here somewhere, 'it's an ill wind' and all that but I can't quite finish it.

Lindisfarne is joined to the mainland by a causeway which is under several feet of water water at high tide but there is no harbour on the island.

There is an anchorage, but it needs settled weather and a favourable tide for a successful visit. Unfortunately for me, both conditions were absent.

I sail close in to see the anchorage, the village and the castle originally built by the Tudors.

Crossing the Border to Eyemouth
The whisky comes out approaching Berwick Upon Tweed to celebrate crossing the border at last and on into my native Scotland. The light breeze swings from the north (on the nose) round to the south east (from behind).

The engine is switched off, all sail is set and at last we are sailing peacefully in a good Force 4 breeze (15/20 mph).

For the next two and half hours. Dark Star reels off the next twelve miles in effortless fashion. If only this was the norm! Pushing up the east coast has generally been a motorsailing grind since turning north at Ramsgate.

The entrance to Eyemouth harbour is invisible when approaching from the south. You sail well past before seeing a narrow channel, surrounded by rocks, open up.

Its intimidating for the newcomer and once into the inner harbour you wonder why your buttocks are aching. 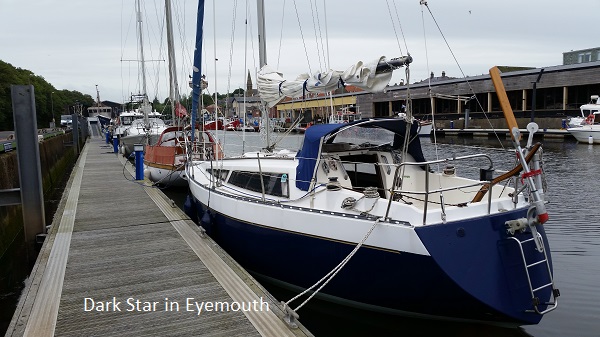 Eyemouth has a good long visitors pontoon, but the charge per night is £21.00, £2.20 extra for electricity and a shower cost another £1 (in the form of two fifty pence pieces). Welcome to Scotland!

My sister Kathleen, brother in law Jim and nephew Calum have driven down from Musselburgh to welcome the ancient mariner. After pounding the mean streets of Eyemouth, we found an upper class chippy and down to a most enjoyable meal.

I savour a white pudding and chips and Jim had the house special pizza, featuring toppings of haggis, black pudding and white pudding. I want to take a picture, but the pizza had disappeared by the time I got the phone out. 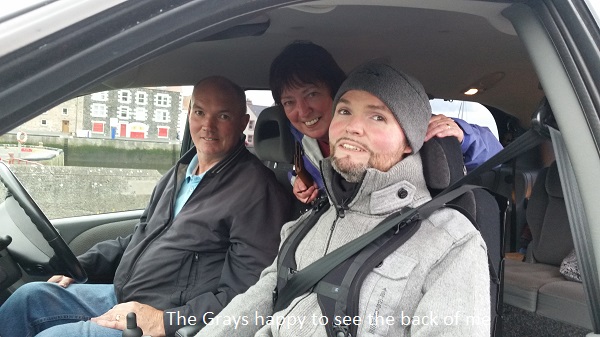 They bring with them a Cob Cooker (Google it!) which son Andrew had given to me on father's day and had forwarded to my next port of call. Pictures of the Cobb Cooker in action are sure to be taken some time on the trip.

Too soon it was time to say goodbye to the family who hardly look too sad in this departing shot, but it is kind of them to make the trip down and it is much appreciated.

Thursday July 7 Eyemouth to Anstruther - 23 miles Five hours of the worst and the best!

This is a fairly short sail in terms of mileage. It takes me up the Scottish east coast past Torness nuclear power station, Dunbar, the Bass Rock and finally across the Firth of Forth via the Isle of May.

It might be one of the shorter trips so far but it nearly finishes within an hour of starting. A little explanation.

I am a wee bit shaken to be ploughing headlong into sharp, breaking waves within half an hour of leaving harbour.

I have my work cut out holding the course and become disheartened as waves break constantly over the bow. The seas are confused and give the appearance of wind opposing a strong tide.

I am even more confused. This was not the plan. I decide to stick it out for another half hour and if no improvement, will turn back. Another worry is the appearance of water dripping through the forward hatch onto the bunks, bedding and clothing.

I cover the area under the leak with plastic sheeting and press on. Half an hour later conditions seem not much better, but the leak at the front appears to have stopped.

I give it another half hour. The waves are still breaking but they seem less steep.

Finally it dawns on me why conditions are so uncomfortable. The coastline here does not run due north, but sweeps north west putting my planned course too close to the wind (wind 270, course 300).

There are big spring tides of 2 knots or more and I had left harbour close to the bottom of the tide cycle.

The tide is pushing me north west but the wind opposes the tide, causing steep breaking waves around the rocky headlands we pass, such as St Abbs Head.

Another niggling concern is the performance of the saildrive under pressure and leaking sea water into the lubricating oil. However, engine and saildrive are performing well as I motorsail hard into the wind and waves. 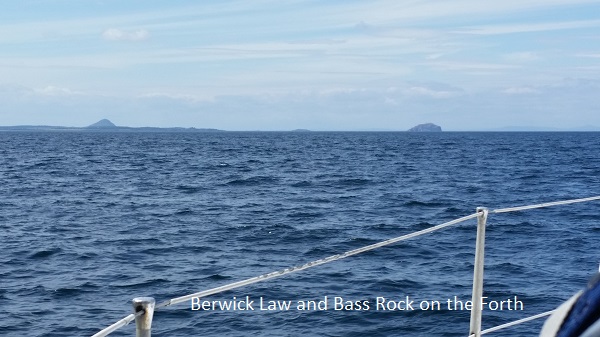 Two hours into the trip, the wind eases, there is an obvious change in tide conditions and the sea flattens very pleasingly. Then the sun comes out!

Ahead the Bass Rock rises unmistakably, but I can also see the Isle of May which lies well out in the Firth of Forth.

I can now alter course and fall 20 degrees off the wind, with Bass Rock to port and Isle of May to starboard. As we pass Dunbar and North Berwick, the engine is switched off.

For the first time since I left Shoreham By Sea 550 miles ago, I am able to shake a reef out of the mainsail and extend the full genoa. What a grand nine mile sail I had across to Anstruther on the north Fife coast.

Over the radio comes a call for Dark Star. Two fellow Leisure owners have set off from Elie harbour and are sailing out to escort Dark Star into Anstruther. We duly meet up a mile out of Anstruther with a flurry of mutual photo snapping. 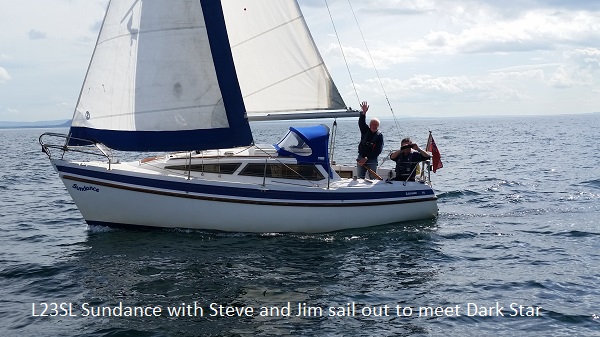 In a short time, Scottish beer (a pint of 'heavy') is being downed in the nearest tavern.

I had corresponded for many years with Steve who produces and arranges the printing of the excellent Leisure Owners Annual Handbook as well as producing the artwork for the thrice yearly magazine Saltings.

We have never managed to meet before, so there was a lot of catching up to do as a curry followed the pints. I noticed an interesting speciality up here, Haggis Pakora. 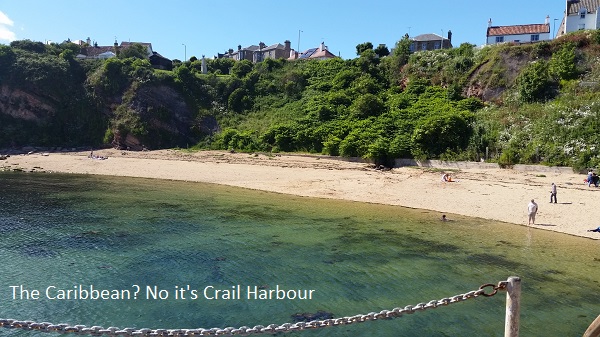 Steve Blaney has spent a lifetime involved in the promotion of tourism in the East Neuk of Fife (neuk is Scottish for corner).

On a windy but sunny day, instead of sailing his boat back to its mooring in Elie Harbour, Steve takes me on a tour of the unspoilt and unbelievably pretty little harbour towns of Crail, Anstruther, Pittenweem, St Monans, Earlsferry and Elie.

There seems to be a drying harbour every couple of miles. Provided your boat can take the ground, the choice of places to visit is quite bewildering, all within the sheltered waters of the Firth of Forth.

As for the weather, well whatever you prefer, it will show up sometime during the course of one day.....The area is remarkably unspoilt and makes Cornwall look overrun and swamped by comparison.

After a tour of Steve's beloved East Neuk, the wind and tide conspired against moving his boat Sundance back to Elie, some 6/7 miles away, but it looks possible tomorrow morning at 7 am...

After a most enjoyable supper and natter back at Steve and May's house in Elie, we return to Anstruther harbour.

Steve sleeps on board Sundance and at 7 am we both duly set off back to Sundance's home mooring at Elie. It is wet, with a steady drizzle, poor visibilty and lobster pots by the zillion.

Not a trip to savour but it is interesting to see the small harbours from close inshore. 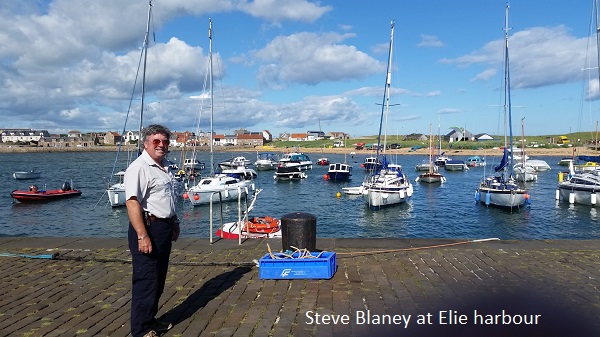 Back on board Dark Star around 10am, and dried out (me not the boat), I am ravenous and feel the pull of a 'Full Scottish Breakfast' which earlier I had seen advertised to include: Bacon, egg, mushroom, sliced sausage, black pudding, potato scone, haggis, beans, toast with tea or coffee. All for £5.65.

Always aware of the need to eat healthily, I ask that the sliced sausage be left off, but I do enjoy the rest!

The remainder of Saturday is taken up faffing about on the boat and completing this blog. Tomorrow if the weather allows, I am off to Arbroath, thence to Stonehaven, Peterhead, Banff, Lossiemouth and Inverness.

So there could be just 'six sleeps' before the Caledonian Canal and Loch Ness, but the forecast for the coming week is very unsettled. What changes?

Thanks for reading this