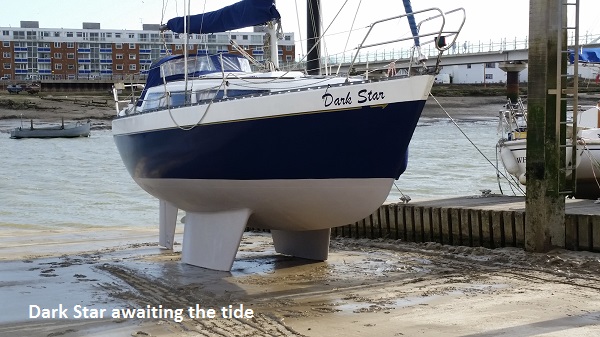 Dark Star may be 38 years old but she was robustly built in glass fibre. I have owned her for over 26 years. and in recent years I have replaced engine, saildrive, fuel tank, rudder, mast, standing/running rigging and sails.

I was satisfied that fundamentally, Dark Star was pretty well prepared for the sail around Britain.

Health and Safety
In this category fall two new ICOM radios, one fixed and one handheld, both with DSC and GPS functionality. I hardly used the fixed set and all shore communications were carried out on the excellent Icom hand held radio.

I carried flares, a liferaft (in valise), an inflatable dinghy and a Suzuki 2.5 four stroke outboard. In many harbours, especially on the Scilly Isles, the inflatable and outboard were indispensable.

A good first aid box was included with plenty of adhesive plasters. At the start of a trip the skin on the hands is soft and vulnerable!

The number one rule for a solo sailor is not to fall overboard. A safety harness and line is probably more important than a lifejacket. A solo sailor in the water can only wave goodbye as his yacht sails gaily on under autopilot.

However wearing a lifejacket (with name) could aid identification....

Anchor And Chain
The standard anchor carried on Dark Star was an old fashioned 25lb (11.4 kilos) CQR attached to 12 metres of 10mm chain.

Without any electric or mechanical windlass I have always found the CQR a bit of a handful and instead used as big a Danforth type anchor as would store in the anchor locker.

I carried spare chain and four anchors in total, but never had to use them. The Danforth did all the work.

I always aim to anchor on mud or sand. The Danforth flukes dig in well, assisted by the weight of 10 mm chain. A s/s swivel connects chain to anchor rode.

I sleep with confidence at anchor, well at least until the turn of tide and the chain starts rumbling along the bottom!

A nightmare for the single hander is discovering a dragging anchor in a strong wind. Trying to recover the anchor manually to drop it elsewhere, is well nigh impossible.

Perhaps for the solo sailor, there is a case to be made for fitting an electric windlass as a safety feature?

Sails and Rigging
The mainsail on the Leisure 27 is quite small as was the fashion in the 1980's. The much larger genoa does most of the work and it's mounted on a furling system from Sailspar .

The Sailspar furler has a continuous line system and the furler has given good service for over 8 years.

Sailing single handed on a reach or a run, in anything approaching a Force 5, I drop the main and sail on a full genoa alone, with just fingertip control required on the tiller. This also eliminates the possibility of an accidental gybe.

Engine and Saildrive
In 2010 I replaced the old single cylinder diesel, Volvo MD5A, with a new Beta 16hp twin cylinder engine which never missed a beat all the way round Britain.

A reliable engine is an absolute requirement for this trip, to keep you moving when there is little wind and to ensure efficient progress to windward by motor sailing.

Coupled to the Beta is a saildrive, an SD60 from Technodrive in Italy, which has proved less satisfactory. Prop shaft seals failed to keep sea water from mixing with and emulsifying the oil in the saildrive leg.

I seemed to find a solution on the trip by using bog standard engine oil instead of thinner transmission fluid, but it's something of a puzzle.

I was dubious whether these items from Plastimo would survive the trip, but they served well and proved a good buy. Raising a bunk lid, you could see at a glance how much water was left.

I fitted carbon filters to each tank, popped in a water purifying tablet when filling up and never had any concern about drinking the water. 100 litres comfortably lasted 4/5 days, but I was single handed!

I also carried plastic 10 litre water containers which were much used in harbours where the water tap was far from the berth.

On the Scillies there are no marinas dispensing free water. The only quayside water facility is in the very busy St Mary's Harbour where they charge for every litre of water.

Sailing around the Scottish Islands and the Scillies, it's prudent to start with full water tanks. However I found that two plastic 10 litre containers were easy to carry and take ashore in the dinghy.

There always seemed to be a tap at hand if you asked around. It's worth taking along a short length of hose and a few fittings to get water from tap to container. 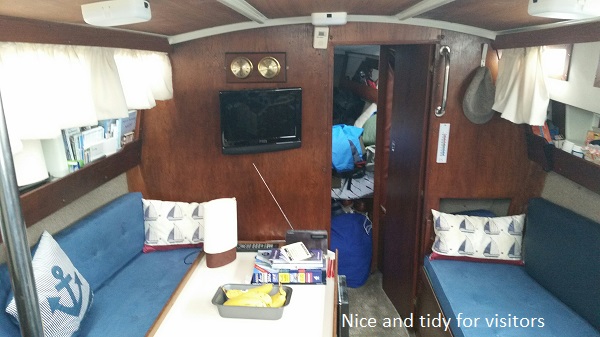 Heating
Born in Scotland, I know how cold and damp it can be up north. Best investment was the purchase of an oil filled, 600 watt, electric panel radiator. Mounted low on a bulkhead amidships, the little radiator was switched on as soon as I hooked up to shore power.

It provided a nice, dry, heat which banished dampness. By day, the on board temperature was 20/22 degs when it was just 14 degs outside. Also carried was an electric fan heater, used rarely for a quick boost, but too noisy for anything more.

When shore power was unavailable, the reliable little catalytic ALKE gas heater took over. These Dutch Alke catalytic heaters have no moving parts, require no electricity, are completely silent and provide heat without flame, using butane or propane gas.

They produce no carbon but consume oxygen and should not be left on overnight.

Power
The principle source of power was the engine alternator charging Dark Star's two service batteries. Both batteries only store 100 amps in total, but were always well charged by much necessary motor sailing and they were also trickle charged by a fixed 30 watt solar panel. Without a decent alternator you will not get very far.

Also on board, was a small TV and DVD player. I found that with a signal booster and a caravan type aerial, I could get a good digital picture in most places at high tide.

When the tide was out and the boat was 6 metres lower, getting a signal could be trickier. I set off with a digital (DAB) radio, but it simply consumed batteries and I soon bought a replacement old fashioned FM/AM set.

For extra power in remoter areas like the Scilly Isles, I carried a flexible 120 watt solar panel with matching 100 amp leisure battery which worked fairly well.

However as the boat moved at anchor, the panel had to be constantly adjusted to catch the sun.The angle of the panel to the sun made a big difference, around 30 degs seemed best.

Steering
On 8-14 hour legs, hand steering for long periods was neither attractive nor safe. I carried two Simrad Autopilots (TP10s) plus a wind vane (Pacific Light From Windpilot)

The two Simrads did a good job, but in heavy rain they were wrapped in cling film. On the odd occasion when the sun was hot, a damp cloth kept the electronics from frying.

On a run or a broad reach in a force 5+, once the swell built up, the electric autopilot would struggle as waves pushed the stern sideways.

Dropping the mainsail helped, but sheeting in the genoa quite hard and running the engine around 2000 revs, eased the strain on the autopilot.

Going to windward sailing solo for long periods, needs some thought. If the wind is stronger than F3-4 and the tide is running against the wind it could become too uncomfortable, especially if you are a retiree and the wind rises a notch.

Just the conditions you may encounter going anti clockwise up the east coast of Britain, if the wind is from the north and you sail with a north going ebb!

Fuel-Diesel Paranoia
When a new Beta 16hp diesel engine was fitted in 2010, I replaced the old, original steel fuel tank with a 30 litre plastic one, fitted in the starboard locker so I could see the contents of the tank at a glance.

This plastic tank is easily removed and cleaned out at the end of each season.

I also carried 40 litres in 10 litre cans which were re-filled singly and emptied in strict rotation into the main tank. This method gave me 4 separate sources of fuel.

I admit to be paranoid about picking up contaminated diesel. The system worked well and I could carry diesel from garages when none was available in the harbour.

Sprayhood
Long trips going to windward, especially when motorsailing, brings seawater over the bow, driven rain from above and significant wind chill! I found a decent sprayhood gave so much protection that I can't imagine attempting such a trip without one.

At anchor or on a buoy, while the wind blows and the rain pours down, you can leave the main hatch open and even sit in the cockpit under the shelter of the sprayhood.

Twice I was caught at sea in thunderstorms and torrential downpours, but not a drop of rain came through the open main hatch.